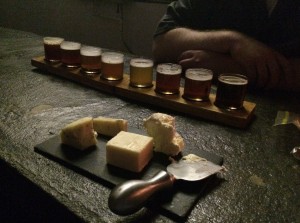 Tucked away in a little industrial area in Old Town Manassas is this awesome little brewery by the name of Heritage Brewing.  Owned by veterans, the theme celebrates the history of this great nation and all of their flagship beers are named accordingly.  We’ve had the pleasure of spending quite a bit of time here and were eager to finally do a cheese pairing with their brews.  Here we note our favorite pairings so far.  We’ll go back when they introduce any new experimental brews, but until then, we plan to just enjoy their current line-up.

Revolution is a very nice amber ale.  Easy to drink with a dash of hops, this brew was begging for an interesting cheese.   We paired this up with the Yancey’s Steakhouse Onion cheese.  It isolated the hop flavor, but didn’t amp up the bitterness.  And quite frankly, we just wanted this cheese on top of a grilled burger with a pint of Revolution.

Their best selling beer, King’s Mountain, is a Scotch style ale.  We brought out some of Cabot’s Alpine Cheddar (available locally, we found ours at Safeway).  What a nice pairing.  The cheddar pulled out the deep caramel notes of the malts and gave a richness to this beer we didn’t expect.

Not only do they have their regular King’s Mountain, Heritage has also aged some of this phenomenal beer in oak barrels.  And boy, did that pay off.  First, we paired the Oak Aged version with some Lincet Triple Crème Brie.  Not only do you still get the rich caramel notes, it pulls out the sweetness from the whiskey barrel aging.  The sweetness wasn’t overwhelming, which can sometimes make a brew feel more like dessert.  Next, we tried the Alpine Cheddar again.  WOW.  With the cheddar, the whiskey component from the aging was pulled to the forefront and completely unexpected.  The Wench isn’t a fan of whiskey, but if she could get it to taste like this beer did with this cheese, she’d drink nothing else.

Heritage is a great place to come hang out for a pint or two, and most Saturdays they have a food truck come by.  But what makes them stand out to us is they are really committed to the local community, our veterans, and being as “green” as possible in their day to day operations.  The tap room staff is fantastic and if you’re really lucky, you might just run into the owner Sean pouring a pint or two.  Their website is here www.heritagebrewing.com.  Follow them on Facebook to get the latest info on events at the brewery or to see which festivals they will be attending.